So I am assuming that Reproductive rights includes the right TO reproduce as much as it does not to...right? And if it makes sense for abortion care it should make sense regarding other types of reproductive care? Or other types of care period?

So if I were having a baby, or outpatient reproductive surgery, or any outpatient procedure at all, I should feel that any attempts to regulate health care facilities that did these procedures were an attempt to deny me proper health care?

I should not feel at risk at all that the doctor at my outpatient facility did not have admitting privileges at the nearby hospital in case I had to be transferred there?

I should feel completely comfortable that my facility would fight such regulations all the way to the supreme court? Or close its doors rather than provide them?

I should not feel at risk that the government would pass a bill so that the state had no right to regulate my healthcare facility? Or to persecute doctors that caused my death?

How many women having a baby, or outpatient surgery or any other kind of medical care would put themselves at such risk?

Tell me again how the Women's Health Protection Act is meant to protect me?

It seems to me that this would constitute a return to the back alley concerning abortion itself and a lack of actual concern for the actual health concerns and needs of all women.

That's how I see it.

Posted by Unknown at 8:11 PM No comments:

Thoughts From A Pregnancy "Survivor"

Well, I guess that pregnancy is a disease now. A disease that is so life threatening that birth control is necessary to me as preventative health care. So necessary, in fact, that I can not only expect, but force, the rest of the country, be it the government or my employer, to pay for it for me. Pregnancy is such an extreme threat to my life that if others will not pay for my birth control I can then consider it a declaration of war against me. I have graduated from being just a uterus to becoming a poor, pathetic victim of my uterus. I guess that makes me a pregnancy survivor...six times. I really beat the odds. I am thinking that pregnancy should have a ribbon like the other terminal diseases. Most likely it should be pink and blue. 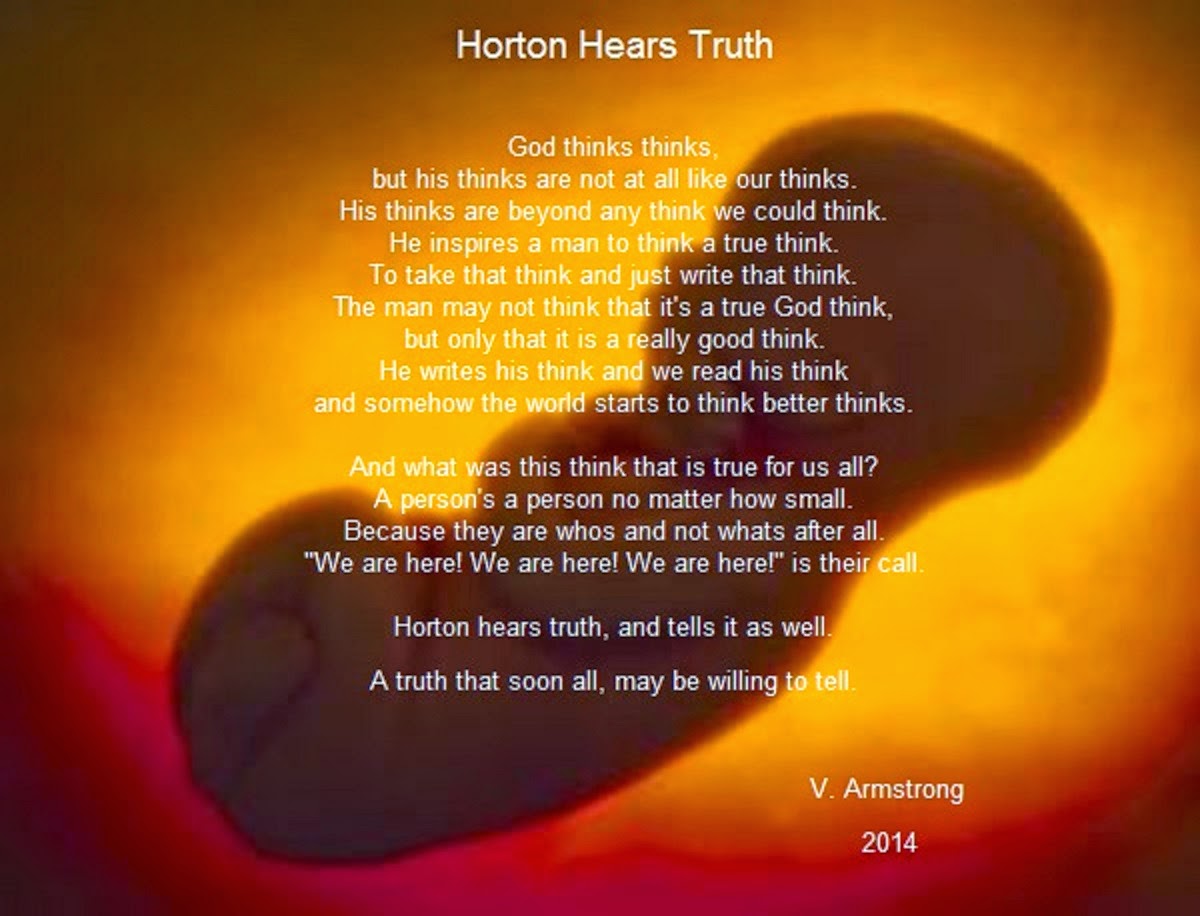 Posted by Unknown at 6:01 PM No comments:

Killing The Innocent From Higher Ground

Boy, I hate providing links to articles like this. It just feels like you are somehow spreading it.

Something that struck me though. It seemed that this article was discussing a strategy more than what was truly believed to be a moral truth. They are going to present it as a moral good but in reality it will merely be a shift in strategy... changing the terms and definitions for a more favorable result. Cold, deliberate and strategic.

Soon this will be an abortion discussion
"Abortion kills a living human being"
"We must admit that is true"
"How can you then justify killing another human being?"
"When it is a moral good, a sacred gift and the very work of God"

Just remember as we listen to these arguments for death, before they penetrate and invade the intellect with the smooth, seductive cleverness of the serpent in the garden...remember that the terrorist of 9-11 were convinced that they had a moral high ground and were on a sacred mission to do the work of their god. They knew that human lives would be lost, deliberately so. Many of the wrongs, the atrocities in the history of the world have been committed through such reasoning.

We do realize that we are talking about human sacrifice right now? Taking innocent human life for the moral good, for the sacred, for God.

That's what I thought.

Maria Divine Mercy is a self-proclaimed seer/visionary. She claims to have been receiving messages from God the Father, Jesus and the Virgin Mary since 2010. She hid behind anonymity. All any knew of her was that she was a wife and mother from somewhere in Ireland. She claims to be the last prophet. It does not appear that she has ever submitted her messages to the authority of the Church for examination. As a matter of fact the messages claim an authority that is greater than the Church. In the last year, several bishops from around the world have condemned her messages. Because she would not reveal her identity it may have been difficult to ascertain which bishop had jurisdiction.  Recently the identity of this seer was discovered and is reported as being Mary McGovern-Carberry of Dublin Ireland. Today, the Bishop of Dublin, Archbishop Diarmuid Martin, issued a statement concerning these messages.  http://www.dublindiocese.ie/content/statement-maria-divine-mercy. He stated that " these messages and alleged visions have no ecclesiastical approval and many of the texts are in contradiction with Catholic theology. These messages should not be promoted or made use of within Catholic Church associations."

Dr. Kelley Bowring, a Catholic theologian had previously endorsed the messages of Maria Divine Mercy. Dr. Bowring has issued a statement that he will comply with the Bishop's statement and would no longer be selling his book "The Great Battle" which relied on the MDM messages as a source. http://twoheartspress.com/blog/compliance-on-mdm/
However, Dr. Bowring also included a link to an article on some statements the Archbishop had made concerning homosexuality that may allow for the questioning of the Archbishop's decision in the future with allegations that he has abandoned Church teaching.

According to the MDM messages, Pope Francis is the False Prophet and many priests and Bishops have lost their authority. I have seen a MDM video that said the Pope would indeed condemn the messages but that his authority to do so is not recognized by them.

There are also books that have been published. The Book of Truth Vol. 1-3 as well as the Crusade of Prayer Book. It has been claimed that the Book of Truth is equal to scripture in its authority.

The MDM messages are not consistent with Church teaching. The messages themselves as well as many who follow them exhibit a disregard for the Pope and the authority of the Catholic Church. The Church through the Bishop with jurisdiction has not given their approval to promote the messages of Maria Divine Mercy. It has now become a matter of believing in the Church or believing in a seer.
There are many who follow these messages that will disregard the ruling of the bishop because the messages have told them to do so. There are some, however, who may not realize that they are a part of the MDM by participating in the prayer groups. I post this for the benefit of those who wish to remain obedient to the Church

Posted by Unknown at 9:32 PM No comments:

This made my heart hurt. I think I lost my breathe for a second as well.

It's right out in the open now. Everybody knows exactly what happens with an abortion and it is just okay. 3000 babies lose their lives every day in the United States. It is far safer to be a turtle egg.

I am wondering what she will think when she becomes old and possibly becomes a time-sucking monster with a constant neediness. Of course then there is euthanasia, assisted suicide and the more recently coined term...rational suicide.

They had rational suicide in the movie Solent Green. For those who may not know it...Solent Green is people.  Of course that is just science fiction...right?

Back in 1973 they assured us that these things would never happen. Guess that wasn't true. What a bunch of schmucks we turned out to be.

Posted by Unknown at 9:52 PM No comments:

Just checking.
Posted by Unknown at 10:27 PM No comments:

Ok. The Pew Survey. We do realize that out of 77 million American Catholics they only actually talked to 351 of us? Right? That was the sample size...351. Then they extrapolated and crunched some numbers that then are supposed to represent the thoughts and feelings of the American Catholic.

So when we say that 22% of American Catholics went to confession less times last year than they did the year before we do realize that there were less than 100 people that actually said that. So because of that we are then to infer that there has been a significant decline in the people going to confession and that then correlates directly to the attitudes of Pope Francis...right? Because that is what I hear has been inferred.

Did we find out if these were really practicing Catholics or Catholics because their mama done told them and had them baptized? Well according to the Mass attendence of that survey the ones attending Mass weekly were about 40%. So from a sampling of people of which 60% are Catholic pretty much at Christmas and Easter we can accurately say that Catholics are not going to confession as much as they used to and attribute that directly to Pope Francis. Because, of course, all other factors and reasons for this decline were eliminated. Did the survey ask them if they had car trouble once or twice? Did the survey ask how much less? We don't know any of those things for sure.

But what some people do seem to know for sure...it is definitely because Pope Francis is too relaxed in his leadership. That's for darn sure.